The Warning Signs of Mental Illness in Veterans 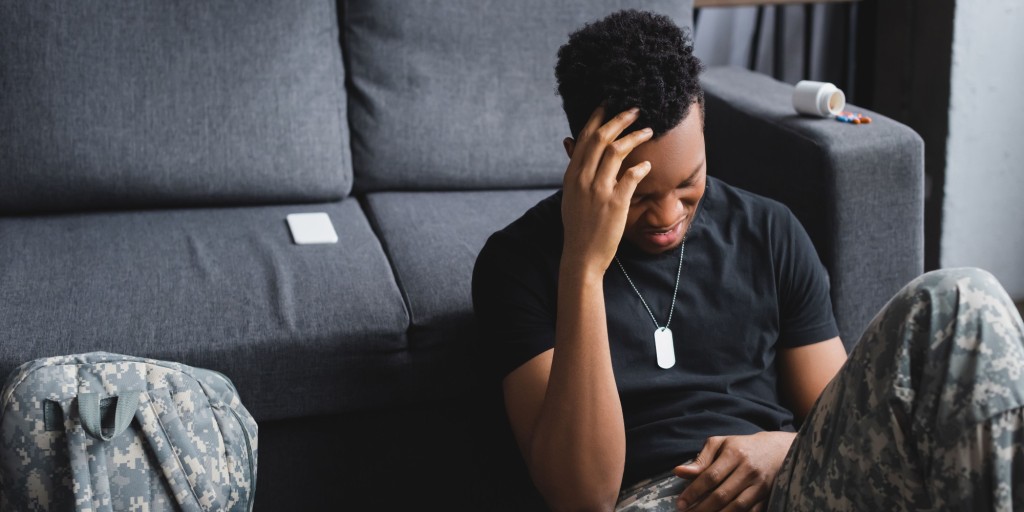 It can sometimes be difficult to tell the difference between going through a rough patch vs the warning signs of mental illness. Part of the issue is that these signs can be subtle or exhibited in unexpected ways. However, it’s important to address concerning new feelings or behaviors, as these signs can indicate an underlying mental illness.

Every mental health condition has its symptoms, but some common signs of mental illness can be identified in veterans who are struggling. If you think your past in the service is affecting your mental health, it’s time to get help.

The warning signs of mental illness can be difficult to spot at first, especially since they manifest in a wide range of behavioral, emotional, and physical symptoms. However, most people first notice that something is wrong with their mood. This could include feeling persistently anxious, depressed, or even just consistently tired or worn out.

One of the biggest warning signs of mental illness, though, is using drugs or alcohol to cope with these negative feelings. For most people, it’s normal to have rough patches in life. But self-medicating with drugs and alcohol is a key sign of a mental health condition, and it can quickly make symptoms even worse. This is especially true for veterans, who face increased risk of developing a substance use disorder.

In fact, as many as one in 10 veterans will be diagnosed with a substance use disorder in their lifetime, according to the National Institute on Drug Abuse. This is largely because veterans often present with more risk factors than civilians due, which can lead to developing several warning signs of mental illness. 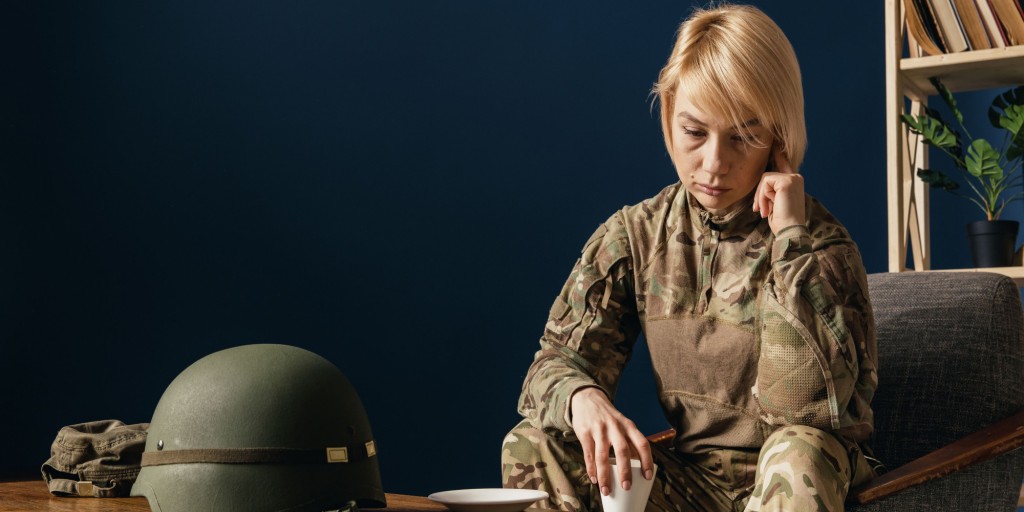 Understanding where the warning signs of mental illness come from can be just as puzzling as the symptoms. Not all veterans share the same experiences during their service or in their personal lives. But through shared traumatic experiences, veterans do often go through many of the same struggles. And for veterans who cannot resolve that trauma, they face an increased risk of developing a mental health condition.

One risk factor unique to veterans is combat exposure. As the name indicates, this describes the trauma of seeing or engaging in violence against other people in military combat. Even for people who are not injured in combat, these experiences can be deeply traumatic, resulting in invisible wounds of war that may not properly heal on their own. Often, combat exposure will eventually lead to post-traumatic stress disorder (PTSD), especially without professional support at a veteran rehab center.

Another type of trauma that can lead to a substance use disorder is military sexual trauma (MST). This type of trauma refers to service members who have been sexually harassed or assaulted during their military career. This trauma comes in many forms, including unwanted sexual advances, coerced sexual encounters, and rape. This is a form of PTSD that that often goes unreported, leaving individuals to remedy the symptoms alone. And without peer support, warning signs of mental illness often develop.

Veterans are at a significantly higher risk of experiencing depression in comparison to the civilian population. This mood disorder is characterized by persistent feelings of sadness and a loss of interest in most activities. It can affect how you think and behave, causing a variety of emotional and physical problems.

Some other symptoms of depression include:

If you experience these warnings signs of mental illness, then you may be living with depression. On the one hand, experiencing symptoms of depression occasionally may not necessarily be a cause for concern. However, if the symptoms persist or worsen after two weeks, you may be struggling with major depression. Veterans are also at an increased risk of suicide, which goes up when veterans abuse alcohol or drugs.

One of the reasons many veterans may be hesitant to reach out for help sooner is because of the stigma that surrounds seeking help for mental health. As a result, alcohol can become a remedy for depression symptoms for veterans because it’s readily available. This makes it easier and more socially acceptable to consume without question. However, this will only exacerbate the warning signs of mental illness.

Traumatic events such as military combat, assault, sexual assault, or experiencing disasters can lead to PTSD. This disorder is prevalent among veterans, with a high percentage of soldiers experiencing symptoms from being previously stationed in Afghanistan and Iraq.

Some common symptoms include:

Oftentimes, veterans go through what is referred to as a honeymoon period as soon as they return home. During this period, veterans feel the initial relief and happiness of returning home to their loved ones and familiar surroundings. However, within a few weeks to months after acclimating the warning signs of mental illness begin to appear. One of the first signs that something is wrong is a new or increased reliance on alcohol or drugs.

Substance abuse starts when veterans attempt to heal invisible wounds from war or service-related injuries. Although drugs and alcohol may initially remedy the symptoms, they don’t get to the root of what’s causing PTSD. Professional medical intervention is recommended to help veterans unpack the trauma leading to their newfound addiction.

How Veterans Can Get Help for Mental Illness and Addiction 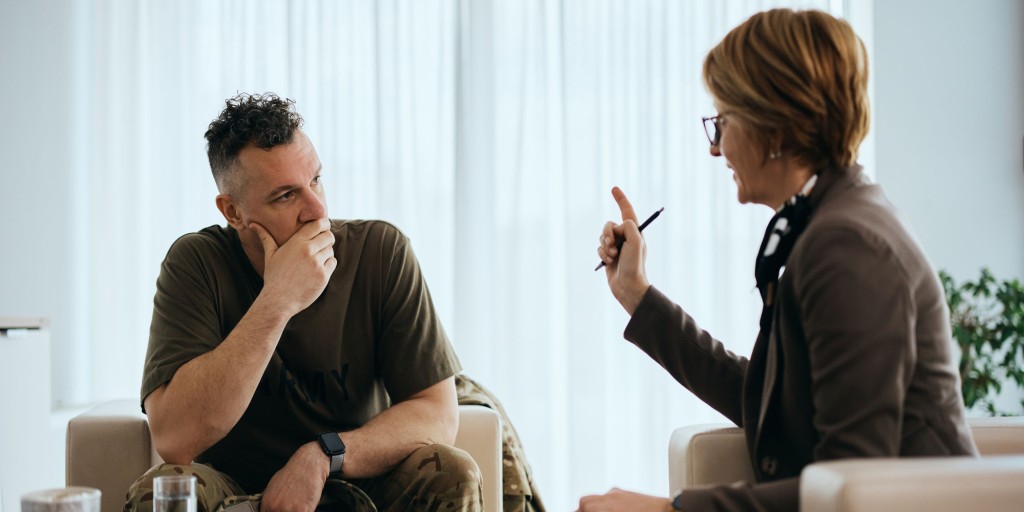 Seeking help when you think you’re experiencing the warning signs of mental illness can be daunting. However, if you’re using drugs or alcohol to cope with a mental illness, then you need professional support right away. And Heroes’ Mile, a veteran rehab in DeLand, Florida, is ready to help.

Since many veterans turn to drugs and alcohol to cope with military-based trauma, they often need to undergo detoxification before starting addiction treatment. Here, veterans receive 24/7 medical supervision as they go through withdrawal. The medical staff makes the process as comfortable as possible as the body learns to function without being dependent on drugs or alcohol to function.

After detox, patients can enroll in the residential drug and alcohol rehab treatment. Heroes’ Mile uses evidence-based addiction treatments like 12-step programming to help veterans struggling with substance abuse that ranges from alcohol to opioids. Veterans in the program can also benefit from a variety of therapeutic treatment options. These options include cognitive behavior therapy (CBT) to shift negative thought processes and behaviors into more positive responses, and EMDR therapy, which can help veterans process unresolved trauma and thus resolve the warning signs of mental illness.

If you believe you are showing some of the warning signs of mental illness, get the help you need from a veteran-only operated treatment center where other patients and staff understand what you’re going through. Heroes’ Mile is dedicated to helping veterans in Florida receive the mental health and addiction services they need to recover from their invisible wounds of war. If you are ready to seek treatment but have questions on how to get started, call the admissions office at 888-838-6692 or fill out this confidential form. Don’t wait to get help.

For many veterans, it’s not unusual to receive an opioid prescription. But over time, as opioid tolerance develops, many military...
Read
addiction and trauma therapy

Many veterans return from military service bearing scars they didn’t have before, but not all scars are physical. For some,...
Read
Addiction Help for Veterans

Veteran Support Groups: How Can They Help?

Overcoming your mental health and addiction battles alone can be difficult. This is where veteran support groups in Florida can...
Read

For many veterans, it’s not unusual to receive an opioid prescription. But over time, as opioid tolerance develops, many military...
Read more
Advertisment

For many veterans, it’s not unusual to receive an opioid prescription. But over time, as opioid tolerance develops, many military personnel find themselves turning...

Can Anxiety Be Cured? How to Reduce Symptoms

From Springbrook Hospital - Many people experience anxiety before speaking to a crowd, taking a test, or going in for a job interview. However, others...

Many veterans return from military service bearing scars they didn’t have before, but not all scars are physical. For some, the trauma they endured...

For many veterans, it’s not unusual to receive an opioid prescription. But over time, as opioid tolerance develops, many military personnel find themselves turning...

Can Anxiety Be Cured? How to Reduce Symptoms

From Springbrook Hospital - Many people experience anxiety before speaking to a crowd, taking a test, or going in for a job interview. However, others...

Many veterans return from military service bearing scars they didn’t have before, but not all scars are physical. For some, the trauma they endured...